A busy and successful Eisteddfod!

An ambitious and packed programme of public events and lectures was presented by Academi Hywel Teifi at the National Eisteddfod in Llanrwst between 3-10 August 2019, showcasing the research and expertise of Welsh medium students and staff from across Swansea University.

The Literature Pavilion (Y Babell Lên) was at the centre of Swansea’s activities, sponsored for the first time by the University at this year’s Eisteddfod and for the next three years. The highlight of the week was the Hywel Teifi Memorial Lecture delivered at Y Babell Lên on Thursday, 8 August by Professor Gwynedd Parry, from the Department of Welsh, on the topic 'The Legal Tribulations of Conwy Valley Poets and Writers'. The lecture was based on Professor Parry's new book ‘Y Gyfraith yn ein Llên’ ('Law in Our Literature') (University of Wales Press). The lecture was followed by a reception for alumni and friends of the University in the company of singer and composer Huw Chiswell, a former student of the Department of Welsh. Huw Chiswell also took part in an event with Swansea University Honorary Fellow Dewi Pws Morris and Cleif Harpwood discussing the influence of place and community on their songs and poems.

Other events at the Pabell Lên during the week included a lecture by Professor M. Wynn Thomas of the Department of English Literature to mark Emyr Humphreys' 100th birthday this year. Poet Aneirin Karadog, a PhD student in the Department of Welsh, discussed his new book about life in Brittany with the poet Twm Morys and following the recent new edition of Elena Puw Morgan's novel 'Nansi Lovell' by Honno Press, which is a record of the author’s relationship with the Welsh Romany during the first half of the twentieth century, the author's granddaughters, Dr Angharad Puw Davies (Swansea University School of Medicine) and Dr Mererid Puw Davies (UCL) discussed her work and life.

As well as the events in the Pabell Lên, Academi Hywel Teifi also organized events for University staff across the Eisteddfod field, including a discussion session between Dr Gwennan Higham, of the Department of Welsh and Dr Angharad Closs Stephens of the Geography Department on their research on the language rights of minorities and immigrants with the new Welsh Language Commissioner, Aled Roberts. Dr Simon Brooks of the Morgan Academy discussed his research into the impact of holiday homes with Siân Gwenllian AM and Dr Gwenno Ffrancon, Director of Academi Hywel Teifi, chaired a debate on women's equality with Helen Antoniazzi of Chwarae Teg and columnist Beca Brown. Dr Gethin Matthews of the Department of History gave  a lecture in Y lle Hanes, in partnership with the National Museum Wales based on his recent publication  'Having a Go at the Kaiser' (University of Wales Press). And Professor Daniel G. Williams of the Department of English Literature discussed the latest volume to appear in his University of Wales Press series Safbwyntiau ( perspectives)  on the history of Psychoanalysis in Wales with the author Llion Wigley.

Director of Academi Hywel Teifi, Dr Gwenno Ffrancon, said: "It was been a wonderful week for the University at the Eisteddfod in Llanrwst, where the immense talents of our institution’s staff and students was clear to see. It was also good to start the University's centenary celebrations and we look forward to building on our partnership with the National Eisteddfod. " 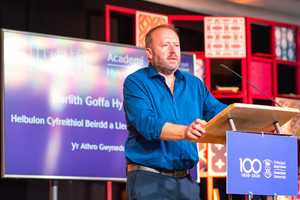